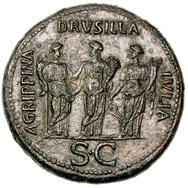 Caligula and Sisters depicted on Roman coin - issued early during Caligula's reign
Agrippina was disadvantaged when it came to gaining power in Rome, as the large majority of women weren’t nearly as influential as men. This was due to women being seen as inferior to men and therefore didn't have many rights the men held. These were mainly the right to vote and hold a political office. Her disadvantages however, started at the early age of 4, when her father, the popular military general Germanicus died suddenly of a mysterious illness, creating a lot of suspicion. It was rumoured at the time that the assassin was Piso, working for the then Emperor and Germanicus’ uncle, Tiberius, as he believed Germanicus had become too powerful and popular with the people of Rome, and feared his position as Emperor was in danger. The situation only grew worse for Agrippina, as her remaining family members were then imprisoned, where her mother and two of her brothers starved to death, leaving Caligula, Agrippina and her two sisters (Livilla and Drusilla). On top of that, Tiberius arranged for Agrippina to marry Gnaeus Domitius in 28 AD, when she was just 13 years old. According to ancient historian Suetonius, Gnaeus Domitius was “a wealthy man with a despicable and dishonest character”, and he was “a man who was in every aspect of his life destable”. (Suetonius, The Twelve Caesars, 1957). However, Suetonius most likely held bias against Domitius, as Suetonius was of the equestrian order, and it was said that at the Roman Forum, Domitius pulled out an eye of an equestrian because the equestrian openly criticised him. Agrippina and Gnaeus Domitius had a baby in 37 AD, who would eventually become Emperor Nero. Shortly after, Tiberius died, leaving Caligula the Emperor. Initially, Caligula was good to his sisters, giving them various titles and honours as well as claiming to love Drusilla like he loved his wife. After Drusilla died in 38 AD, it was said Caligula went insane and did not show any love or respect towards his remaining sisters. After an unsuccessful plot to kill him in 39 AD, where Agrippina and Livilla planned to make their third accomplice and cousin, Marcus Lepidus, the new Emperor, Caligula had Agrippina and Livilla exiled to the Pontine islands and sold their possessions, separating Agrippina from her son Nero. 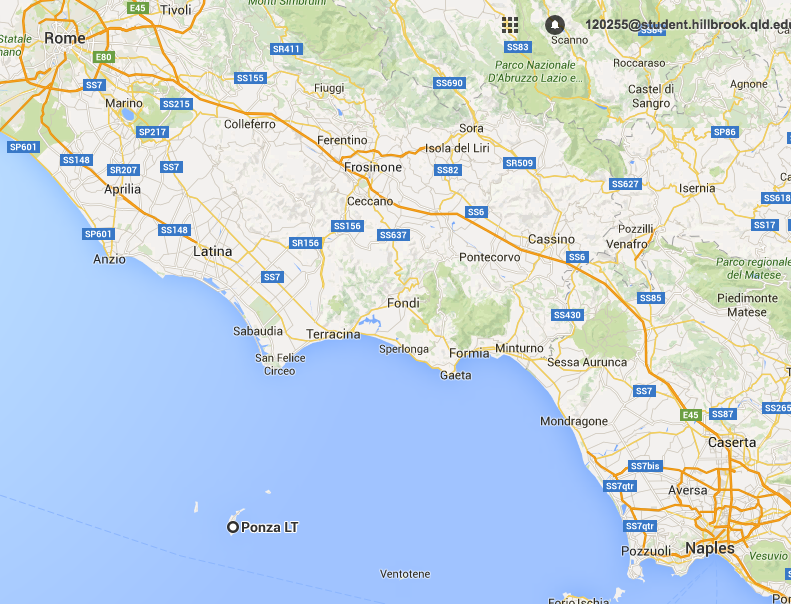 Map showing Ponza (Pontine Islands) in relation to Rome
Miriam Griffin, a modern historian focusing on the early Roman empire commented on her harsh early life “Agrippina's childhood and youth would have warped the most sanguine nature, as her prospects fluctuated between extremes.” (G.M Nero: The End of a Dynasty, 1985). Not much is known of Agrippina during her time of exile, however Caligula, his wife and daughter were murdered in 41 AD, when Agrippina’s uncle Claudius became the new Emperor. Claudius immediately removed her and her sister Livilla’s exiles and they returned to Rome. Even after these difficult circumstances, Agrippina would manage to manipulate men around her with the one advantage she had been given. Her sexuality.
Powered by